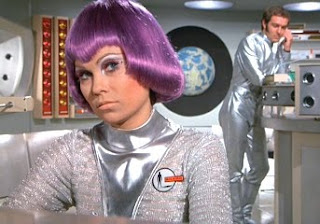 Perhaps this all was an overreaction.

By him to the hair color.

By her hair to the dye.

For the second time in less than a year, a Philadelphia police officer's hair has become tangled in controversy.

A female African American officer filed a complaint Wednesday with the Pennsylvania Human Relations Commission, saying her captain had ordered her to change her hair color, which he said was purple.

When Officer Renee Norman refused, she twice was sent home, forcing her to miss her shift. She maintained the color was red.

Norman was accused of violating Directive 78-D, which governs officers' hairstyles. It bans "unnatural colors" such as purple, blue, and green.

Norman said that red is not banned, and that she had worn the same style for seven years without complaint from any supervisor until Wilson.

Wilson said purple was a violation of the directive, according to the complaint.

Lt. Frank Vanore, a police spokesman, said the directive was "pretty clear," but he would not comment on a pending complaint.

"I don't know what the captain saw or what the officer is alleging," he said.

Last year, a white male officer ran afoul of a superior when he went to work with his hair in cornrows. Officer Thomas Strain was assigned to desk duty until he agreed to cut his hair.

In October, Strain filed a complaint still pending with the Human Relations Commission. Strain and Norman say they were discriminated against on the basis of race.

Norman, a mother of four, has been a police officer since 1996. Four years ago, she was transferred to the Ninth District, which covers Center City west of Broad Street.

Wilson became the captain there about 21/2 years ago, the complaint said.

Norman said she was on patrol in October when a sergeant acting on Wilson's orders told her to go home and change her hair color.

Norman said she did her own hair using a commercial dye labeled "crimson." She did not remember the brand. Her color and others are not uncommon among black female officers, she said.
"Orange, blond, I've seen all sorts of colors," she said.

In her complaint, Norman accuses Wilson of starting "a campaign of discrimination and retaliation" against her. Wilson, she said, has assigned her to "undesirable" details, reduced her overtime, and kept her from working high-profile events.

Norman's filing says Wilson has been the subject of at least four employment complaints from black officers, but it did not provide details.
Posted by Sam at 7:40 AM