IMHO this police-involved shooting needs to be investigated and presented to a Grand Jury. 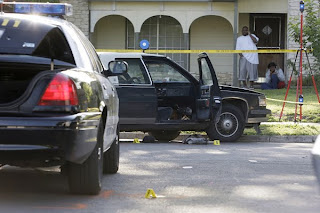 That way justice will be served.

The officers are either exonerated or indicted and prosecuted.

Suspect gunned down
By Michelle Mondo and Valentino Lucio - Express-News

Dominique Smith's cousin was inside their grandmother's home early Wednesday when she heard someone outside yell, “Get down!”

About five gunshots followed, she said.

Lexus Smith, 17, said she ran outside. But before she could get far, she said she saw her wounded cousin looking up and heard him utter his final words, “That's my cousin Lexus. This is my grandma's house.”