Thanks Guys we got Health Care through, you can go away now 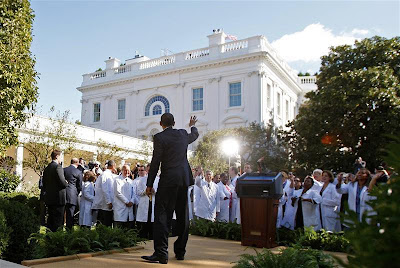 I feel for you, I really do, however I do not believe you'll be able to make anyone in this particularly 'tone-deaf' Congress do anything.

I believe many of them feel regarding the Healthcare Bill that they got what they wanted and to Hell with everyone else.

Furious that Congress has failed to fix a Medicare formula that twice this year threatened to slash their payments by 21 percent, doctors in San Antonio and across Texas have vowed to collect a million signatures on a petition to push lawmakers into action.

“The very foundation of Medicare is crumbling,” said Dr. David Henkes, a San Antonio pathologist and a trustee of the Texas Medical Association. “And the solution is not in the health care bill that was passed and signed by President Obama in March.”

At a press conference Monday at the Bexar County Medical Society headquarters — with similar events held throughout the state — Henkes warned that the payment formula was already souring doctors on taking on new Medicare patients.