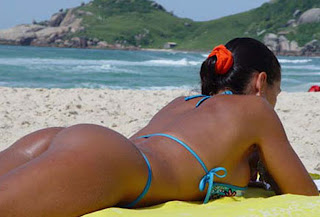 Well there you go.  Its right up there with women causing earthquakes.

Another reason for Western civilization  to resist the ideology of  the Mullahs of Iran.

As if we needed another one.

Hey does the picture make the Earth move for you?


Women with suntans are violating Islamic law and will be arrested in Iran, the capital city's police chief was reported by The Daily Telegraph as saying Wednesday.

"The public expects us to act firmly and swiftly if we see any social misbehavior by women, and men, who defy our Islamic values," Brigadier Hossien Sajedinia said.

"In some areas of north Tehran we can see many suntanned women and young girls who look like walking mannequins," he continued. "We are not going to tolerate this situation and will first warn those found in this manner and then arrest and imprison them."

The warning follows recent comments made by a hard-line Iranian cleric, who claimed women dressed in revealing clothing were disturbing young men and causing earthquakes.

A preacher has also told the residents of Iran's capital Tehran to leave the city.

"Go on the streets and repent for your sins. A holy torment is upon us. Leave town," said Ayatollah Aziz Khoshvaqt during a recent sermon in northern Tehran.
Posted by Sam at 8:06 AM