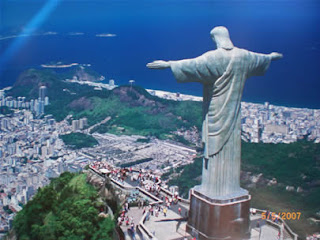 Pretty unbelievable and senseless of someone to deface this statue with graffiti.

Rio's Christ statue graffitied
RIO DE JANEIRO (AFP) – Brazilian officials were Friday cleaning up graffiti on the famed Christ statue overlooking Rio de Janeiro, which was vandalized after access was cut off in the wake of devastating rains.

Vandals over the past week took advantage of the rare closure of Mount Corcovado, following deadly landslides, to gain access to the Christ the Redeemer statue, spraying black graffiti up the figure's head and arms, said Bernardo Issa, head of the Tijuca National Park.

On part of Rio's landmark -- one of the Seven Modern Wonders of the World -- someone sprayed screeds about violence and unsolved crimes, and the taunting phrase "When the cat's away, the mouse will play."

"The area (of damage) is very large. We didn't expect a cowardly act like this," said Issa, adding that surveillance would be stepped-up to protect the eight-decade-old statue, host to some one million tourists per year.

Landslides triggered by heavy rain earlier this month killed at least 246 people, mainly in poorly constructed slums perched on the side of mountains around the city.
Posted by Sam at 8:54 AM