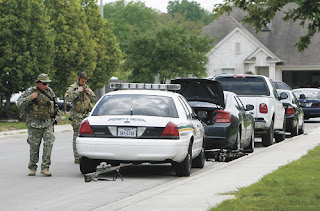 I'm glad no one was injured and it ended with him being taken into custody apparently peacefully.

4-hour SWAT standoff ends peacefully
By Bryan Shettig - The Herald-Zeitung
A 30-year-old New Braunfels man barricaded himself in his home Tuesday afternoon during a four-hour standoff that ended when a police SWAT team found him hiding in the home’s attic.

Police arrested Jeremy W. Remmler, 30, on charges of evading arrest after taking him out of the home.

Officers fired about 12 rounds of pepper gas through the home’s window during the standoff, according to Lt. John Wells, an NBPD spokesman. Wells said the man still didn’t come out of the home.

No one was injured in the standoff, said Darren Brinkkoeter, battalion chief for NBFD.

The standoff was at a home in the 500 block of Walnut Heights Boulevard. It started about 11 a.m. after police received a call that the man had threatened to harm a family member, Wells said. Officers approached the man outside his home, where he briefly stepped outside and then shut himself in. The man did not respond to knocks at the door, Wells said, or repeated phone calls.

Police eventually called in its SWAT team and negotiators continued calling the man by phone and over loudspeakers, asking him to come out of the home with his hands up.

The man was not armed, Wells said.

“We wanted to check on his welfare,” Wells said.

The man never made any threats to hurt himself or law enforcement officers, Wells said.

Police evacuated about five houses on the street, Wells said, though only three had residents in them.

Officers finally entered the home, only to find him alone in his attic.

The man is now in Comal County Jail on two outstanding warrants and was also arrested on charges of evading arrest.

This is the second standoff in New Braunfels in the past week after a New Braunfels man barricaded himself in a home March 31 with a semiautomatic rifle in the Gruene Crossing subdivision. SWAT team members eventually forced their way into the house to arrest the man, who had apparently had “some personal issues,” said Lt. Mike Penshorn of NBPD previously.
Posted by Sam at 6:43 AM