No permit? No problem 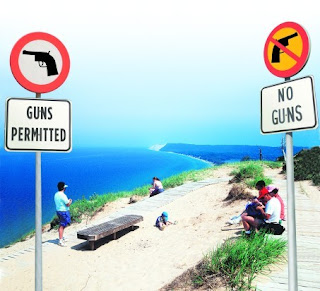 I don't think is a good idea.

Allowing anyone to carry a concealed weapon?

No training?
No knowledge of the law?
No screening?
No problemo.

Nope, not a good idea.


PHOENIX – Favoring the constitutional right to bear arms over others' concerns about gun safety, Gov. Jan Brewer on Friday signed into law a bill making Arizona the third state allowing people to carry a concealed weapon without requiring a permit.

The measure takes effect 90 days after the current legislative session ends, which likely puts the effective date in July or August.

"I believe this legislation not only protects the Second Amendment rights of Arizona citizens, but restores those rights as well," Brewer, a Republican, said in a statement.

Alaska and Vermont now do not require permits to carry concealed weapons.

By eliminating the permit requirement, the Arizona legislation will allow people 21 or older to forego background checks and classes that are now required.