It wasn't my fault 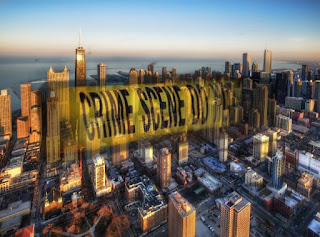 New excuse?  Allah made me do it?

CHICAGO: In a bizarre case termed "horrendous" by Chicago police, a 32-year old man was arrested after he shot dead his wife, three children and an adult claiming "Allah" had told him to do it.

Police have taken a 32-year old man, believed to be from neighbouring Wisconsin, into custody but they did not revealed his identity.

According to sources quoted by the Chicago Sun-Times, the shooter told police "Allah" had told him to kill his family and that he felt "too bad I ran out of bullets".

"It is really horrendous. Something like this is pretty incomprehensible," Chicago Lawn District Police Commander John Kupczyk said.

The dead included a woman believed to be the pregnant wife of the shooter; 16-year-old Keyshai Fields, who was four months pregnant; a 3-year-old girl named Keleasha Larry; and a 7-month-old boy who was the shooter's son, according to law enforcement officials.

Family members said the dead 7-month-old was named Jihad. Chicago Police Department spokesman Roderick Drew said the offender is in custody, and "we believe we have the weapon used".

Two others injured - the children's 57-year-old grandmother, Leona Larry who was visiting from Wisconsin and a 13-year-old boy were taken to a hospital.

According to the police, a 12-year-old girl who was inside the house, got away and ran to a gas station called 911, saying her uncle had come from Wisconsin with his wife and began shooting family members.
Posted by Sam at 7:53 AM