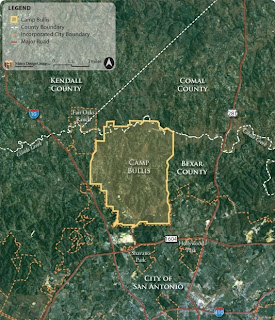 This really chaps my ass.

There is a really simple answer to all this.

Then you do not have to worry about the sound-proofing requirements.  You went to Camp Bullis, it didn't come to you.  The truth be told you probably got the land cheaper because everyone knew it was close to Camp Bullis and therefore problematic to build on.  Wasn't it?

So go elsewhere and don't screw up its mission.

Bullis-area construction may get tougher
By Sig Christenson - Express-News


AUSTIN — Though it seemed the dust had settled over development around Camp Bullis, the Army now is pressing for tighter restrictions.

The post, which won new protections for the 27,994-acre training range last year, also asked the House Committee on Defense and Veterans' Affairs to draft a bill giving the city and Bexar and Comal counties the power to require better soundproofing homes in areas where military operations occur.

Developer Michael Moore countered that builders and landowners already had carried a disproportionate burden to protect the camp, where Army combat medics are trained. He also warned that new soundproofing standards would add to the cost of any new home.