Sit back and watch this one 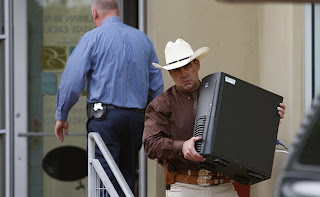 Oh boy, get the popcorn out on this matter.

It should be a regular barn-burner of an investigation and case.

The former city manager of Windcrest and his brother, a San Antonio developer, are facing allegations they conspired to defraud millions from the city and the tech company Rackspace Hosting Inc.

On Tuesday, Texas Rangers and the Bexar County district attorney’s office executed a search warrant at the offices of developer Gary Cain, looking for evidence that he and his brother, Ronnie Cain, who recently retired as Windcrest’s city manager, engaged in various financial crimes.

Neither Cain has been charged with a crime.