Peekaboo they found you 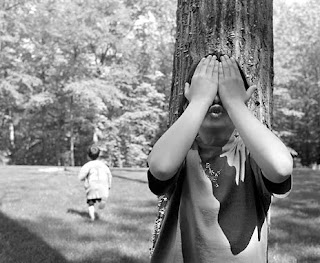 Well they found you.

Stuck suspect says he was playing Hide and Seek
Yahoo.com

NORTH EAST, Md. (AP) – A burglary suspect came up with a creative explanation after he was found dangling from the ventilation system of a Maryland convenience store. He told police he was playing hide-and-seek.

Cecil County sheriff's deputies said the owner of a BP convenience store in North East was opening up Wednesday morning when he spotted a pair of feet dangling from a duct. Deputies responded and freed a 20-year-old man.

Deputies said the man removed a ventilation cover and crawled through the vent before getting stuck and setting off a fire extinguisher that sprayed powder all over the store.

The man told deputies he was playing hide-and-seek on the roof with other adults and decided to hide in the ventilation system. He said the other players couldn't figure out where he was and stopped looking for him.
Posted by Sam at 7:37 AM