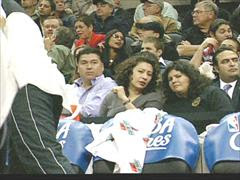 Well, they found her explanation regarding the patio not credible.

A judge lied to the Judicial Conduct Commission?  Or mislead them?

Please say it ain't so.

A judicial oversight commission has sanctioned County Court-at-Law No. 7 Judge Monica Guerrero, stating in a public admonition that her acceptance of a Spurs ticket cast “discredit on the judiciary.”

The ruling was signed in March but made public Friday by the State Commission on Judicial Conduct. The group also scolded Guerrero for writing a letter of recommendation for someone who had a driving while intoxicated charge pending in another court.

Additional charges — that attorneys paid for construction of a patio at her home and concerning her involvement in the highly publicized Southwest Airlines ticket scandal — were dismissed for lack of evidence.

The commission noted, however, that her explanation for the patio allegation “was not credible.”