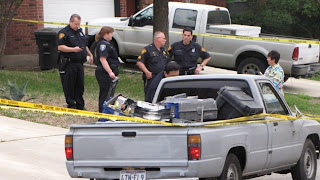 Good work by the neighborhood witnesses and the SAPD to catch this POS.

San Antonio police Tuesday morning arrested a man suspected of stabbing another man in what they said was an attempted theft at a far North Side home.

Robert Alzapiedi, 37, was waiting to be booked into Bexar County Jail on a charge of aggravated robbery with a deadly weapon. Bail was set at $50,000.

The victim was taken to University Hospital in stable condition with a stab wound to the abdomen and a cut to his left hand, according to a police report.