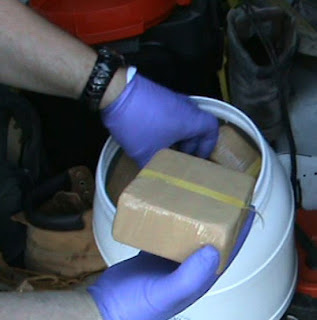 Police arrested a man Friday night after they discovered almost 22 kilograms of heroin inside his vehicle during a traffic stop on the West Side, officials said.

Javier Garcia, 21, was booked into the Bexar County Jail on Saturday evening and charged with possession of a controlled substance with intent to deliver, which is a first-degree felony, officials said. Bail was set at $25,000.

San Antonio Police Department spokesman Matthew Porter said Tactical Response Unit officers stopped
Garcia while he was driving his vehicle near Cupples Road and Colima Street after he ran a stop sign. When police conducted a search, they found more than 40 bricks of heroin hidden throughout the vehicle.
Posted by Sam at 9:06 AM