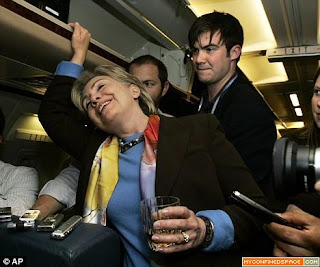 Has no one at the State Department been made aware of the problems surrounding the scientific evidence concerning global warming?

Or do they just really don't care and will go down the road anyway regardless of its effect on the U.S. economy?

I think its they don't care and they believe they know best.

WASHINGTON, April 19 (Reuters) - An environmental coalition publicized a new U.S. draft report on climate change on Monday, one week before the expected unveiling of a compromise U.S. Senate bill that aims to curb greenhouse gas emissions.

The Project on Climate Science, a coalition of environmental groups, publicized the report in advance of Earth Day on April 22, a spokeswoman said. The report was released with little fanfare on April 7 and posted on the Federal Register on April 8.

The report, a draft of the Fifth U.S. Climate Action Report that will be sent to the United Nations, says bluntly: "Global warming is unequivocal and primarily human-induced ... Global temperature has increased over the past 50 years. This observed increase is due primarily to human-induced emissions of heat-trapping gases."

Supporters of the bill hope this will pave the way for the full Senate to debate and pass a measure in June or July. The State Department report will ultimately go to the United Nations Framework Convention on Climate reports to this body were in 1994, 1997, 2002 and 2007.

The draft report is available online at http://www.state.gov/g/oes/rls/rpts/car5/index.htm.
Posted by Sam at 6:11 AM