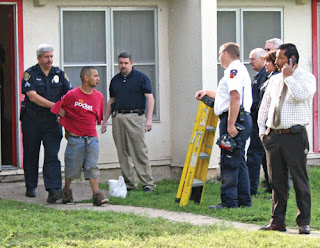 Also to all who helped, thank you!


Robbery suspect unable to evade police
SEGUIN — A 21-year-old Seguin man was arrested on an aggravated robbery allegation after a brief search that centered on his girlfriend’s apartment Tuesday morning.

Luis Rangel Jr. was booked on a first-degree felony allegation of aggravated robbery after surrendering to officers from the attic of an apartment located in the 700 block of Stratton Street.

In addition, he was booked on allegations of aggravated assault with a deadly weapon and vehicle burglary in two unrelated cases.

Police Chief Kevin Kelso said officers were called to the Seguin Food Mart located in the 700 block of South Austin Street at 7:47 a.m. after the clerk there called in a robbery by a young Hispanic man who reportedly said he had a weapon.

“The call was for a robbery, unknown amount of cash, with a suspect possibly armed with a handgun,” Kelso said.

On the video, Sgt. Kado Cato believed he recognized the suspect.

Luis Rangel Jr. had been subject of investigation in two recent incidents — one an alleged assault outside the apartment off Stratton, and the other a vehicle burglary.

A few months ago, police changed the way they conduct patrols in the city with officers being assigned to specific zones, and the new system, which has been the subject of several recent community meetings, contributed to the quick arrest.

At around 3 a.m. Tuesday, Rangel’s name came up in connection with a vehicle burglary, and that information was passed on to the day shift by a zone officer from the previous shift. The assault Rangel was believed suspect in took place the previous Wednesday, Cato said.

“He would have been a likely focus” of investigation even without the videotape, but Cato recognized him right away.

Police investigated further and developed information that Rangel would likely be at the unit located in Fairview Terrace Apartments.

“We came here and had everyone come out of the apartment,” Cato said. “We went in, and we found him in the attic.”

Kelso said Rangel initially refused to come out, and police prepared for a potential standoff. Diaz went to the attic to talk to him.

In the meantime, Kelso contacted assistant chief Wade Goolsby, who is the administrator for the county’s joint SWAT unit, and tactical officers were called out.

“We called SWAT to get them rolling, and Jaime opened a dialog with him and he came out,” Kelso said.

No one was hurt in the robbery, and no one was hurt in getting Rangel out of the building. Three others who were present were detained as witnesses, Kelso said. The SWAT team was stood down without action.

The money and a pair of Black Diamond sunglasses believed taken in the robbery were found in the attic where Rangel was hiding, police said.

Kelso said he appreciated the support of the fire department as well as the community’s other public safety agencies, the Texas Rangers and County Attorney Elizabeth Murray-Kolb’s investigators, both of whom are former SPD officers.

“The events surrounding the robbery developed very quickly,” Kelso said. “I want to thank all agencies that assisted to include the Seguin Fire Department, Guadalupe County Attorney’s Office, and the Texas Rangers. Without help from these named agencies and all of those others that assist on a daily basis our jobs would be much more difficult.”
Posted by Sam at 7:03 AM