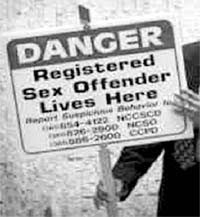 I imagine as time goes on that more and more towns and cities will do restrictive zoning for sex offenders.

Until it gets struck down by the courts.

Cibolo Police Chief Gary Cox said that while some media outlets reported that 85 percent of the city is now off-limits to sex offenders, the actual percentage is “less than 50 percent” because most of the city is still rural.

The 85 percent figure only includes portions of the city north of Farm-to-Market 78, Cox said.

Cibolo covers about a 12-square-mile area, he said.

According to the ordinance, sex offenders charged with child-related sex abuse cases may no longer move into a residence within 2,000 feet of an area where children gather, including schools, public parks and public pools. Sex offenders are also not allowed to loiter within 300 feet of those areas.

Currently, there are two registered sex offenders living in Cibolo and the ordinance has a grandfather clause in case any did live within the 2,000 foot boundary, Cox said.

Landlords and property owners leasing to tenants must also complete a background check, he said, which can be done for free on the Texas Department of Public Safety’s Web site.

“I pushed for this initiative, with the intent to be proactive,” Cox said. “The city has grown about 500 percent in the past five years and this is meant to better manage growth.”

Cox cited other cities in the area near San Antonio with similar ordinances, including Universal City and Hollywood Park.

There hasn’t been a particular incident that prompted the ordinance, said Cox, who has been with the department for nine months.

Neither New Braunfels nor Seguin have similar ordinances.

New Braunfels does, however, comply with state law, specifically Texas Safety Code section 508.187, which calls for a “child safety zone” established by a parole panel where registered sex offenders must parole officers of their employment and prohibits them from going within a distance “specified by a panel of premises where children commonly gather,” according to the New Braunfels city manager’s office staff.

According to the code, those areas include schools, youth centers, playgrounds and “video arcade facilities.”

The city also refers to an opinion issued by Texas Attorney General Greg Abbott in 2007, which does not call into question the constitutionality of an ordinance similar to Cibolo’s stating that “whether a particular ordinance is permitted by the Texas Constitution is a question that must be determined by a court. However, no court has found that a statutory residence restriction violates any federal constitutional provision.”

Residents who wish to see if a sex offender lives in a certain ZIP code can do so online by visiting the DPS Web site at http://records.txdps.state.tx.us.
Posted by Sam at 8:27 AM