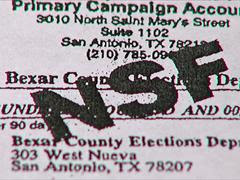 This needs to be repaid, period.

Then let the Democratic Party of Bexar County file charges against Carla Vela, Dwayne Adams, and anyone else involved.

Let them pay the party back as restitution.  The County and the taxpayers shouldn't be hung out to dry on this issue.  County Judge Wolff knows this.


County Auditor Tommy Tompkins — the first and loudest voice in county government to raise the alarm last summer over missing Bexar County Democratic Party funds — retires today. On his way out, he's not hopeful the party will repay the $275,000 it owes the county.

Because some bills are still pending, he says the amount Bexar County is due could rise by as much as $121,000.

The blunt-speaking accountant, who was Harris County auditor for 11 years and Dallas' comptroller for six, has repeatedly pressed the Democratic Party to pay for primary expenses the county incurred in 2008.