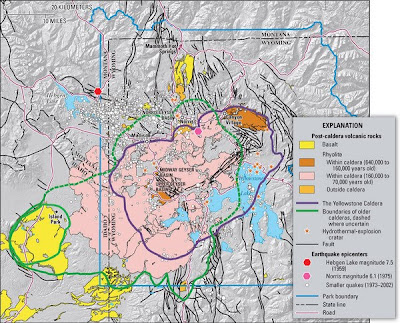 But then again it could happen tomorrow, the next day, or in 2012.


Rare Yellowstone volcano eruption would be deadly
(AFP) –
WASHINGTON — As ash from an Iceland volcano snarled air travel across Europe, experts said an eruption of the 'supervolcano' at the Yellowstone national park would be deadly, though it is unlikely any time soon.

"The next major eruption for Yellowstone, if you have a guess, is probably thousands of years in the future," Bill Burton, a vulcanologist with the US Geological Survey, told AFP.

The volcano, dubbed a 'supervolcano' because of its enormous strength, has not erupted for hundreds of thousands of years.

That track record -- a major event approximately each 730,000 years -- suggests the volcano won't erupt again for another 90,000 years, though Burton noted that there is no real certainty when it comes to volcanic activity.

"You cannot be totally complacent and assume nothing is going to happen," he said.

For vulcanologists, the key is continued study of the history of individual sites. "The more we know about their past behavior makes you a little more confident about what's going to happen next," Burton said.

Some volcanos erupt regularly, every ten years, usually providing signs of instability in the run up to an eruption. Others lie dormant for extremely long periods.

Experts will examine a volcano's history of eruptions, but also use surveillance techniques and technology including GPS to detect whether the volcano is "swelling" because of pressure created by magma.

"If the seismicity and the GPS start showing signs of magma moving then its time to think about gas coming out," Burton said. "So we keep track of all of those things and the more data... you have, the better."

An eruption at Yellowstone, though unlikely in the near future, would have devastating consequences, Burton said.

"The impact would be severe," and would likely send large quantities of volcanic material into the atmosphere.

Yellowstone's last eruption, some 640,000 years ago, sent an estimated 1,000 cubic kilometers of ash and volcanic rock over the American west and parts of the Midwest, spreading as far south as Mexico.

The biggest volcanic eruption in the last two centuries, the 1815 eruption of Mount Tambora on the Indonesian island of Sumbawa, sent 160 cubic kilometers of volcanic debris into the atmosphere and caused an overall drop in global temperatures for the year -- a "year without a summer," Burton said.

The eruption of the Toba volcano in Sumatra some 73,000 years ago, an event 1,000 times more powerful than the 1980 Mount St Helens eruption, may even have wiped out most of the human race, according to a theory based on fossil evidence.