A dangerous place to be 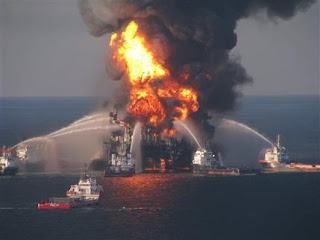 Back in the day when I worked in the Offshore Gulf of Mexico Exploration Division for Marathon Oil Company I would go offshore to drilling rigs when we ran well logs.  Equipment run, usually by Schlumberger, which gave us an indication of the rock layers we had drilled through and their contents.

Those rigs are a dangerous place, or I should say, can be a dangerous place to work.  Aside from all of the work and heavy equipment running about there was always the ever present danger of drilling into an over-pressured zone which could cause the well to "blow-out".  In other words the pressure of the strata you just drilled into exceeds the pressure exerted by the drilling mud and fluids in the well bore and the pressure forces out everything; i.e. drilling mud and fluids, as well as the pipe, if the over-pressure is strong enough.

The material coming out of the hole could be flammable if the the over-pressured zone contained natural gas and a slight spark would ignite it; causing an explosion and fire.

My thoughts and prayers go out to the missing workers and their families.

PORT FOURCHON, La. (AP) -- Survivors of a thunderous blast aboard an oil platform off the Louisiana coast were being reunited with their families at a suburban New Orleans hotel early Thursday as the search for 11 missing workers continued.

About 100 workers had made it to a supply boat after Tuesday night's explosion, then were plucked from the Gulf of Mexico by Coast Guard rescuers. After a slow-moving trek across the waters, the workers finally made it ashore at Port Fourchon earlier Thursday where they were checked by doctors and brought to a hotel in suburban New Orleans to awaiting relatives.
"I've seen a lot of things, but I've never seen anything like that," said a visibly tired worker, who declined to give his name as he got in a car to leave.
The rig, where exploratory drilling was being done about 50 miles off the coast of Louisiana, exploded late Tuesday, sending workers scurrying for safety. Seventeen people were injured in the blast and taken to hospitals, four critically, in what could be one of the nation's deadliest offshore drilling accidents of the past half-century.
Coast Guard crews in two cutters have been searching around the clock for the missing, said Coast Guard Lt. Sue Kerver. The air search was to resume at first light Friday around 6:30 a.m. CDT, she said.
The rig is owned by Transocean Ltd. and was under contract to oil giant BP.
Authorities could not say when the flames might die out on the 400-by-250-foot rig, which is roughly twice the size of a football field, according the Transocean's website. A column of boiling black smoke rose hundreds of feet over the Gulf of Mexico as fireboats shot streams of water at the blaze. Officials said the damage to the environment appeared minimal so far.
Adrian Rose, vice president of Transocean, said the explosion appeared to be a blowout, in which natural gas or oil forces its way up a well pipe and smashes the equipment. But precisely what went wrong was under investigation.
A total of 126 workers were aboard. Seventy-nine were Transocean workers, six were BP employees and 41 were contracted. The Coast Guard said the 17 taken by air or sea to hospitals suffered burns, broken legs and smoke inhalation.
One of the deadliest U.S. offshore drilling accidents was in 1964, when a catamaran-type drilling barge operated by Pan American Petroleum Corp. near Eugene Island, about 80 miles off Louisiana, suffered a blowout and explosion while drilling a well. Twenty-one crew members died. The deadliest offshore drilling explosion was in 1988 about 120 miles off Aberdeen, Scotland, in which 167 men were killed.
Rose said the Deepwater Horizon crew had drilled the well to its final depth, more than 18,000 feet, and was cementing the steel casing at the time of the explosion.
"They did not have a lot of time to evacuate. This would have happened very rapidly," he said.
According to Transocean's website, the rig was built in 2001 in South Korea and is designed to operate in water up to 8,000 feet deep, drill 5 1/2 miles down, and accommodate a crew of 130. It floats on pontoons and is moored to the sea floor by several large anchors.
Workers typically spend two weeks on the rig at a time, followed by two weeks off. Offshore oil workers typically earn $40,000 to $60,000 a year - more if they have special skills.
Working on offshore oil rigs is a dangerous job but has become safer in recent years thanks to improved training, safety systems and maintenance, said Joe Hurt, regional vice president for the International Association of Drilling Contractors.
Since 2001, there have been 69 offshore deaths, 1,349 injuries and 858 fires and explosions in the Gulf, according to the federal Minerals Management Service.
Stanley Murray of Monterey, La., was reunited with his son, Chad, early Thursday morning. His son, an electrician aboard the rig, had ended his shift just before the explosion.
"If he had been there five minutes later, he would have been burned up," a relieved Stanley Murray said.
Posted by Sam at 6:53 AM