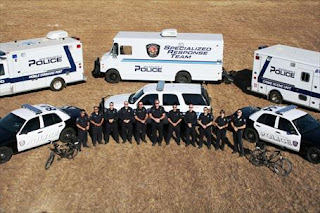 Bobby Whitmire, formerly a police chief in the Dallas-Fort Worth area, retired and has since served as an interim chief in College Station and Bryan, said Mike Morrison, New Braunfels city manager.

Whitmire will begin work May 3 for an undetermined amount of time but will not be fielded as a candidate for the open police chief job, Morrison.

In meantime, Morrison said he and other city officials will send an invitation to members of the public in the next month to hear their opinions on issues concerning them and what to look for in a new chief. City staff recently met with about 30 people in the police department at all levels to discuss suggestions for a new chief, he said.

“We’re still in the preliminary stages,” Morrison said of the search for a new chief, noting the city expects the process to take about three to five months from start to finish.

Whitmire has not previously worked for the New Braunfels Police Department, Morrison said.
Posted by Sam at 5:44 AM