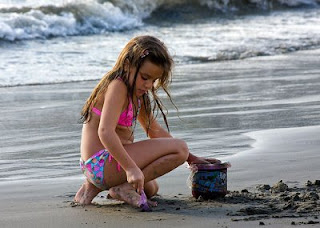 Stealing sand?  From a Beach?

Marathon, Fla. (UPI) -- Police in Florida said a man was charged with theft and drunken driving for filling his truck full of sand

before the vehicle became stuck on the beach.

said deputies responded to reports Sunday of a truck stuck in the sand at Coco Plum Beach in Marathon and three deputies arrived to find Brian Splain, 46, with his 1989 Ford F-150 loaded with sand from the beach, the Miami Herald reported Tuesday.

The deputies said Splain, who failed field sobriety tests, told them he needed the sand for a job.

Splain was arrested and booked into the Monroe County jail on charges of grand theft of the sand, criminal mischief and driving while impaired.
Posted by Sam at 3:11 AM