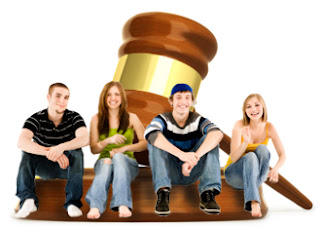 Its a great program.

I believe it helps those who go through it and cuts down on them repeating mistakes.

It allows them to see, learn and understand the legal process by also participating as a juror or even as counsel.

Teen court has first training session
By Bryan Shettig - The Herald-Zeitung
A teenager going before a jury isn’t always in front of a group of their peers, but that’s not the case at Teen Court.

Teenagers, parents and elected officials among others gathered Tuesday at the New Braunfels Municipal Court for the court’s first training session.

Teenagers, from volunteers to home school students and those completing community service, gathered to listen to those who were instrumental in assembling the city’s teen court, which they modeled on similar teen courts around the country.

Residents from age 10 to 17 are eligible for teen court if they are issued a class C misdemeanor citation and plead guilty. After paying a $20 fine, they enter teen court, where other teens act as prosecutors, defense attorneys, jurors and bailiffs on the second and fourth Tuesday each month.

Judge Sara Hartin of the Municipal Court presides over the teen court and said she decided to start a teen court in New Braunfels after having worked in other cities, including Abilene, Plano and Killeen that had similar programs. After meeting with law enforcement, district attorneys and judges several years ago, Hartin found a sponsor for the court in the nonprofit Connections, which volunteered two of its counselors, and received a federal grant.

“It continues to grow as the word gets out,” Hartin said.

Among the most common misdemeanors seen in the court are theft, vandalism, drug use and underage alcohol use, said Joe Vargas, assistant chief of police for New Braunfels.

For some teenagers, the court has provided them life lessons, they said, and perhaps a career backup plan.

For Canyon High School Senior Matthew Farley and Memorial High School graduate Hailey Hoben, the court has given them a chance to volunteer and start to understand law, something both said could potentially be a career for them down the road.

Farley, who said he heard of the court from a school counselor, hopes to be a psychologist, but considers law school an option after being with the court.

“When I first came here, I didn’t know what to do, and everything could be confusing and it was hard to understand all the legal aspects,” he said. “Now I understand a lot of the basics, and if I went to law school I would already have some knowledge. This is definitely an eye-opener for me.”

Hoben, who graduated early from Memorial High School, said she took an instant liking to prosecution in teen court because of her “natural red-headed temper” and while she said she hopes to be a middle school history teacher, going into law now feels like an option. Teen court has also given her insight into responsibility, she said.

“I’ve never had a citation and never plan to,” she said. “You don’t want to put yourself in this position of being in court. This is a real lesson.”
Posted by Sam at 6:32 AM