Why we can't carry liquids on airplanes 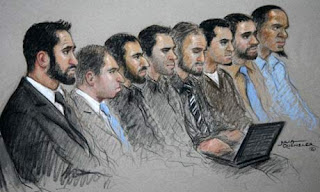 Will these folks be ultimately released if they get sick in prison?

Three men were found guilty today of conspiracy to murder thousands of passengers and crew in an unprecedented airline bomb plot that could have proved as deadly as the 9/11 attacks.

After a retrial at Woolwich Crown Court, jurors found the ringleader, Abdulla Ahmed, and two other men, Assad Sarwar and Tanvir Hussain, guilty of plotting to blow up airliners en route from Heathrow to the United States.

Another defendant, Umar Islam, was found guilty of a more general charge of conspiracy to murder because jurors could not decide whether he knew of the specific targets in the plot three years ago.

Three other men, Arafat Khan, Ibrahim Savant and Waheed Zaman, were found not guilty of conspiracy to blow up aircraft but could face a retrial on the more general conspiracy to murder charge because jurors could not reach a verdict.