Don't piss off a man in a wheelchair 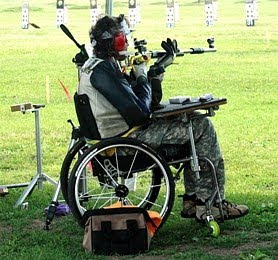 D.C. police said they are searching for a gunman in a wheelchair who shot a woman in her right foot Monday, then fled before patrol cars arrived.

The attack occurred about 1 p.m., moments after the 47-year-old victim had stepped off a Metrobus in the 1200 block of H Street NE, said Capt. Mike Gottert.

The woman, whose wound was not life-threatening, told police that "she had some kind of verbal dispute with the guy two weeks ago," Gottert said. "She was riding the bus. She got off. He came up and shot her. Didn't say anything. Just shot her."