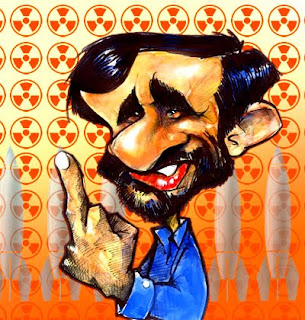 Who knew that my parents, both of whom were concentration camp survivors, conspired to lie to me as a young child about the Holocaust.

So did my surviving Aunt and Uncle. My Grandparents and other aunts and uncles, who did not survive, must have conspired to hide from me and still do.

So they can perpetuate the lie that the Holocaust occurred. >/sarc

This guy just makes me really angry, he talks like a lunatic and he is about to get, if he doesn't already have, nuclear weapons.

What could possibly go wrong?

By Parisa Hafezi and Firouz Sedarat

TEHRAN (Reuters) - President Mahmoud Ahmadinejad raised the stakes against Israel on Friday and called the Holocaust a lie, just as world powers try to decide how to deal with the nuclear ambitions of an Iran in political turmoil.

"The pretext (Holocaust) for the creation of the Zionist regime (Israel) is false ... It is a lie based on an unprovable and mythical claim," he told worshippers at Tehran University at the end of an annual anti-Israel "Qods (Jerusalem) Day" rally.

"Confronting the Zionist regime is a national and religious duty."

Ahmadinejad's anti-Western comments on the Holocaust have caused international outcry and isolated Iran, which is at loggerheads with the West over its nuclear programme.

The hardline president warned leaders of Western-allied Arab and Muslim countries about dealing with Israel.

"This regime (Israel) will not last long. Do not tie your fate to it ... This regime has no future. Its life has come to an end," he said in a speech broadcast live on state radio.