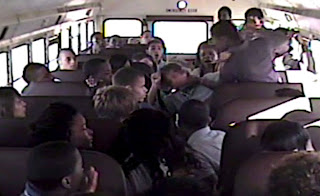 Bullies are bullies, no matter their color/race. Of course, unfortunately, the knee-jerk reaction was to claim this was racially motivated.

The police, after some investigation, apparently withdrew the initial, uninformed comment.

The incident grabbed national headlines and incited a heated debate about race when police said the incident, involving a white victim and black assailants, may have been racially motivated. They later recanted that claim.

Juvenile courts are more informal and private than adult courts. Juvenile court records are not available to the general public.

Robert Haida, the St. Clair County state's attorney, said Illinois law does not permit him to charge the teens in adult court. The law mandates that a minor can be charged in adult court only if the case involves certain crimes, such as murder, aggravated criminal sexual assault, or armed robbery with a firearm.

Warrants were issued for the defendants' immediate arrest. They had been in custody earlier but released pending investigation.

On the issue of a hate crime, Haida said: “No evidence is present to suggest that the motive for the conduct was the race of the victim. Illinois law requires such evidence in order to support that charge. Illinois law is clear that the fact that a defendant and a victim are of different races is insufficient without more evidence to support a hate crime.”

Both students have been suspended from school and could face expulsion.

Belleville police released video of the Monday morning incident and labeled it “racially motivated.” Later, a department spokesman said his initial comments were “personal and emotional” and not accurate.

"The incident appears now to be more about a couple of bullies on a bus dictating where people sit,” said Capt. Don Sax.

The video depicted a violent attack after a 17-year-old student walked onto the bus and looked for a seat, but was apparently refused. He then took a seat next to one of his attackers, who lashed out with a series of punches to the victim's head. At one point, the attacker held the victim by the neck with one hand, while he punched his face with the other.

Another attack ensued a few minutes later, and was eventually halted by another student.
Posted by Sam at 7:07 AM