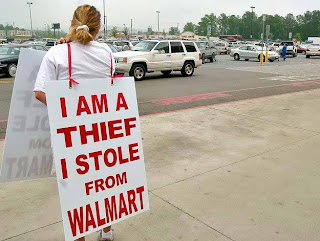 Don't shoplift at that Wal-Mart!

BEIJING — A woman in eastern China was allegedly beaten to death by five employees of a Wal-Mart store who accused her of shoplifting, a police report and state media said Tuesday.

Police have arrested two employees from the store in Jiangxi province, while three others are being investigated, Jingdezhen city police said in a report on their website.

According to the report, the woman was beaten outside her home near the Wal-Mart on August 30 and died in a city hospital on Wednesday last week from injuries suffered during the beating.

Police said the five Wal-Mart employees had stopped the woman in the street and demanded to see her receipt, but she refused because she could not verify their identities, it said.

Following an argument, the five Wal-Mart employees began beating her, it said.

The English-language China Daily on Tuesday identified the victim as Yu Xiaochun, 37.

"They started to hit her because she didn't do what they said," the paper quoted her husband Chen Baolin as saying.

"I got there and tried to stop them but they kept beating her."

It was not immediately known if the woman had shoplifted, the paper said.

The beating intensified as she tried to telephone for help using her mobile phone, it added.

In a statement, Wal-Mart said it was "fully cooperating with the relevant authorities and will release further details as it is appropriate".

"We extend our condolences to the family of the deceased.... The incident and cause of death is the subject of an investigation."