What's more than one and less than two million? 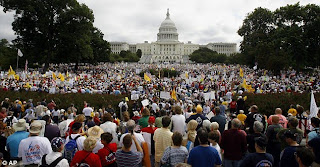 Nothing about this in today's San Antonio paper.

Well, they're in the tank for the administration and LOL what else would you expect?

Up to two million people marched to the U.S. Capitol today, carrying signs with slogans such as "Obamacare makes me sick" as they protested the president's health care plan and what they say is out-of-control spending.

The line of protesters spread across Pennsylvania Avenue for blocks, all the way to the capitol, according to the Washington Homeland Security and Emergency Management Agency.

People were chanting "enough, enough" and "We the People." Others yelled "You lie, you lie!" and "Pelosi has to go," referring to California congresswoman Nancy Pelosi.

Richard Brigle, 57, a Vietnam War veteran and former Teamster, came from Michigan. He said health care needs to be reformed - but not according to President Barack Obama's plan.

"My grandkids are going to be paying for this. It's going to cost too much money that we don't have," he said while marching, bracing himself with a wooden cane as he walked.

FreedomWorks Foundation, a conservative organization led by former House of Representatives Majority Leader Dick Armey, organized several groups from across the country for what they billed as a "March on Washington."

Organizers say they built on momentum from the April "tea party" demonstrations held nationwide to protest tax policies, along with growing resentment over the economic stimulus packages and bank bailouts.

Many protesters said they paid their own way to the event - an ethic they believe should be applied to the government.

They say unchecked spending on things like a government-run health insurance option could increase inflation and lead to economic ruin.

Terri Hall, 45, of Florida, said she felt compelled to become political for the first time this year because she was upset by government spending.

"Our government has lost sight of the powers they were granted," she said. She added that the deficit spending was out of control, and said she thought it was putting the country at risk.

Anna Hayes, 58, a nurse from Fairfax County, stood on the Mall in 1981 for Reagan's inauguration. "The same people were celebrating freedom," she said. "The president was fighting for the people then. I remember those years very well and fondly."

Saying she was worried about "Obamacare," Hayes explained: "This is the first rally I've been to that demonstrates against something, the first in my life. I just couldn't stay home anymore."

Like countless others at the rally, Joan Wright, 78, of Ocean Pines, Md., sounded angry. "I'm not taking this crap anymore," said Wright, who came by bus to Washington with 150 like-minded residents of Maryland's Eastern Shore. "I don't like the health-care [plan]. I don't like the czars. And I don't like the elitists telling us what we should do or eat."

"Republicans, Democrats and independents are stepping up and demanding we put our fiscal house in order," Rep. Mike Pence, chairman of the House Republican Conference, said.

"I think the overriding message after years of borrowing, spending and bailouts is enough is enough."

Other sponsors of the rally include the Heartland Institute, Americans for Tax Reform and the Ayn Rand Center for Individuals Rights.

Recent polls illustrate how difficult recent weeks have been for a president who, besides tackling health care, has been battling to end a devastatingly deep recession.

Fifty percent approve and 49 percent disapprove of the overall job he is doing as president, compared to July, when those approving his performance clearly outnumbered those who were unhappy with it, 55 percent to 42 percent.

Just 42 percent approve of the president's work on the high-profile health issue.

The poll was taken over five days just before Obama's speech to Congress. That speech reflected Obama's determination to push ahead despite growing obstacles.

"I will not waste time with those who have made the calculation that it's better politics to kill this plan than to improve it," Obama said on Wednesday night. "I won't stand by while the special interests use the same old tactics to keep things exactly the way they are.

"If you misrepresent what's in the plan, we'll call you out. And I will not accept the status quo as a solution."

Prior to Obama's speech before Congress U.S. Capitol Police arrested a man they say tried to get into a secure area near the Capitol with a gun in his car as President Barack Obama was speaking.

Today's protests imitated the original Boston Tea Party of 1773, when colonists threw three shiploads of taxed tea into Boston Harbour in protest against the British government under the slogan 'No taxation without representation'.

The group first began rising to prominence in April, when the governor of Texas threatened to secede from the union in protest against government spending. Waves of tea party protests have crossed America since.

Today's rally, the largest grouping of fiscal conservatives to march on Washington, comes on the heels of heated town halls held during the congressional August recess when some Democratic lawmakers were confronted, disrupted and shouted down by angry protestors who oppose President Obama's plan to overhaul the health care system.

Read more: http://www.dailymail.co.uk/news/worldnews/article-1213056/Up-million-march-US-Capitol-protest-Obamas-spending-tea-party-demonstration.html#ixzz0QzLt55Rr
Posted by Sam at 7:14 AM