The warrior has come home to his rest 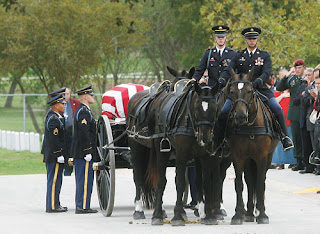 He sounds like the kind of man I wish we had more of, as friends, as neighbors and as citizens.

My condolences to his family, may he rest in peace.

A Soldier's Farewell
By Theron Brittain - The Herald-Zeitung

Army 2nd Lt. Darryn D. Andrews, 34, of Cameron, lived in New Braunfels for the past two years with his wife, Julie Andrews and son Daylan.

Andrews was killed in the Paktika Province of Afghanistan after enemy forces attacked his vehicle with an improvised explosive device and a rocket-propelled grenade. He was assigned to 1st Battalion, 501st Parachute Infantry Regiment, 4th Brigade Combat Team (Airborne), 25th Infantry Division, Fort Richardson, Ala.

After graduation from C.H. Yoe High School, Andrews obtained a bachelors in business from Texas Tech and a masters in education administration from Texas State University in San Marcos. Andrews entered the Army upon graduation.

A New Braunfels neighbor who attended Andrews’ funeral knew him to be a “great guy.”

“They were just super people,” the neighbor, who wanted to remain anonymous, said of Andrews and his wife, who is pregnant with their second child.. “He would help anybody who needed it and was just a really good guy. He never met a stranger.”
Posted by Sam at 6:25 AM