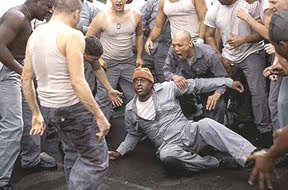 Maybe it was a disgruntled investor?

CONROE, Texas (AP) - A U.S. Marshals Service spokesman says jailed Texas billionaire R. Allen Stanford is being treated at a hospital after being injured during a fight with another inmate.

Deputy U.S. Marshal Alfredo Perez said Stanford was being treated Friday after a Thursday altercation at the private Joe Corley Detention Facility in Conroe about 40 miles north of Houston.

Perez says the 59-year-old's injuries aren't life threatening but declined to discuss details of the altercation. He says the incident is under investigation.