Payback is a b**ch 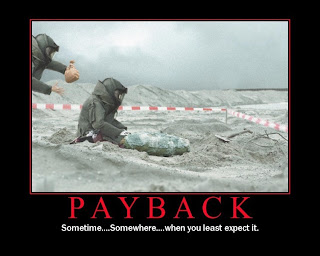 Sounds like Judge Biery did the rest of us a favor and sent her far away which apparently should have been done years ago.

A San Antonio woman who defrauded several people out of more than $70,000 in foreclosure-rescue scams got a hard lesson Friday.

After reportedly telling a victim a Spanish phrase along the lines of “Payback's a (expletive),” Rosario Castro Divins was sentenced to nearly 30 years in prison for her scams, the comment and misbehaving in jail.

The comment came during a break in Divins' trial in June, and its recipient — one of her fraud victims — took it as a threat, the victim and a witnesses testified Friday.