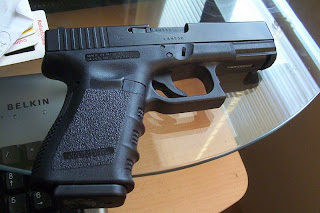 The deceased should not have continued to point the shotgun at the officer.

There will be an investigation and the conduct of the officer reviewed.

At this point it seems to have been justified.

My condolences to his family and friends.

A San Antonio police officer fatally shot one of the city's most wanted men early Tuesday after spotting the 19-year-old running out of a Northeast Side gas station with a sawed-off shotgun in one hand and a bag of cash in the other, according to authorities.

Officer Michael Ruiz, a probationary officer only five months out of the academy, was patrolling the area around 1 a.m. when he pulled into the Valero gas station at Starcrest Drive and Loop 410 as Julio Molinar was running out of the store.

Ruiz, 27, ordered Molinar to stop and the suspect complied, dropping the bag, but pointing the shotgun at the officer, according to a police incident report.