Life is a parade 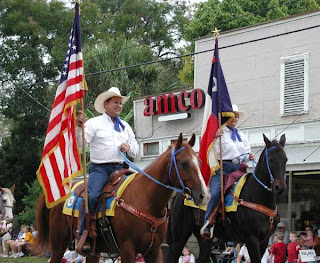 Sometimes the best things in life are free.

What a grand old tradition.


Fresh look at old tradition
By Theron Brittain - The Herald-Zeitung

The gloomy weather that marked the first two days of the fair was nowhere to be seen. The sun came out, and with it, people and their pets.

An informal “pet parade” preceding the main event featured a variety of critters, from a large St. Bernard, aptly named Bernardo, to a ferociously dressed Chihuahua that, with a little help from his owner and a hidden speaker in his float, roared like a lion.

The 116th Comal County Parade began at 10 a.m. with the mainstay of all parades, the fire engines. Kids of all ages looked on, wide-eyed, as the big red trucks cruised through Main Plaza with blasting sirens and flashing lights.

A National Guard caravan got an especially big round of applause, as did law enforcement officers from all over Comal County. Cheers turned into appreciative laughter as one state trooper arrived playing Junior Brown’s “Highway Patrol” on his car’s loudspeaker.

After 2009 Fair Queen Taylor Wetz and the Rodeo Court paraded through downtown, local politicians, including lederhosen-clad Bruce Boyer, mayor of New Braunfels, followed in their wake, waving and joking with constituents.

Nancy Scott, a 10-year resident of New Braunfels, could hardly keep up with her grandson, Kaden, as he charged up and down the sidewalk. Only 13 months old, the toddler is already a veteran — this was his second parade.

“He just likes to get loose and go,” she said as she tried to run him down. Scott has not missed a single parade since she moved here. “It’s definitely something to see.”

Other residents were similarly impressed.

“Just look at all the effort that goes into this,” said Donald Kennady, husband to Jan Kennady, Pct. 4 County Commissioner. “I’ve been coming to this for 15 years and I think all of the activity is just plain exciting.”

Smithson Valley High School’s marching band was the first in a lineup of several local school bands that participated in the parade. Those waiting to see the New Braunfels High School marching band had to wait until the end of the parade, but there was no shortage of excitement in between.

One of the most unique features was a mile-long tractor procession, featuring restored antique John Deeres, McCormicks and Farmalls. Drivers revved their exhausts as they approached Main Plaza, eliciting cheers from the crowd.

Taking it all in was Barbara Brockman, who retired to New Braunfels in 1995 and attended Friday’s event by herself.

“I got up this morning and thought, ‘Oh heck, I’ll see if I can find a parking space and go,” she said. “I’m a people watcher – I just like to come out and see everybody having a good time.”

The parade lasted more than two hours, though the length did not faze most of the crowd. However, one little guy knew something else was waiting for him further down the road, looked up at his father and said: