Yum! Politics to sink your teeth into! (with spicy brown mustard too) 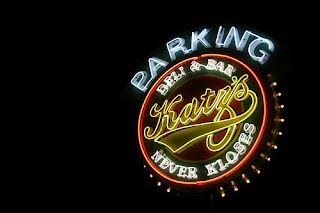 He does run a great restaurant I frequently go there whenever I get up to Austin.

That doesn't mean that a great sandwich guy will make a great Lt. Governor.

Nor are we related.

I do wish him luck however.

'Pastrami King' has an appetite for Texas politics
By R.G. Ratcliffe - Houston Chronicle

AUSTIN — Is Marc Katz — the self-proclaimed Pastrami King of the Texas capital — crazy to run for lieutenant governor?

Colorful, bald and bespectacled, the Austin deli shop owner became famous locally and larger than life with television commercials punctuated by a boisterous “I can't help it, I gotta tell ya,'” followed by his restaurant's slogan: “Katz's never Kloses!”

Katz, 62, is telling Austin friends and fans he plans to run as a Democrat for lieutenant governor. But Katz's personal life has been the kind of shambles that gives Democratic leaders gas.