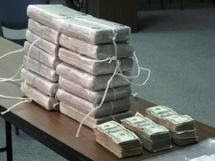 Kudos to all involved!


Authorities seize $700,000 worth of cocaine
By Valentino Lucio - Express-News

Authorities arrested two men and seized $700,000 worth of cocaine Thursday evening on the city’s South and West sides, officials said.

The San Antonio Police Department's Tactical Response Unit and the Drug Enforcement Agency made the bust after a month-long investigation. According Sgt. Dave Berrigan with the Tactical Response Unit, authorities pulled over a vehicle occupied by two men in their mid-30s near Interstate 37 and East Southcross Boulevard. When officials searched the vehicle they found the men were traveling with approximately 10 kilograms of cocaine.