Live or work in Comal County? Have I got a deal for you! 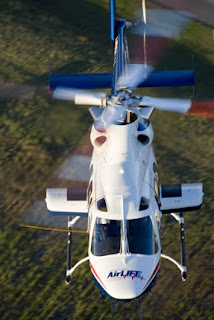 Now this is one heckuva deal.

Sign me up as soon as I get back from South Carolina.

Comal County residents now could save money on the high cost of being flown by helicopter for emergency medical care.

San Antonio AirLife is offering annual memberships that would cover all or part of the cost of transport to a hospital not paid for by insurance providers — an investment of less than $50 that could potentially save victims thousands.

“A lot of people don’t realize the cost of medical transport,” Stephen Soliz, a business development representative for AirLife told Comal County Commissioners Thursday. “We bill by the mile, so a trip from Comal County to San Antonio could cost around $14,000. Some insurance providers will cover it, but some pay for as little as 60 percent.”

The difference, Soliz said, can mean thousands of dollars that have to come out of the pockets of someone who needed an emergency medical flight.

And since Christus Santa Rosa Hospital — New Braunfels doesn’t offer some of the services emergency patients need, they’re often flown to University Hospital or another facility in San Antonio.

“Christus is a great hospital, but it’s not meant to serve the same purpose as some of the San Antonio emergency facilities,” Soliz said. “So we end up flying a number of people from Comal County.”

While not technically insurance, an AirLife membership would essentially serve the same function.

For someone injured who has a private insurance provider that won’t cover the full cost of transport, the membership will pay the rest.

They’re available to any area resident for $49 per household each year. There are also special $25 rates for government workers and emergency responders, and a $10 rate for organizations that have at least 100 employees.

He said the county’s insurance carrier would cover up to 80 percent of the cost of AirLife transport, meaning a county employee would have to pay the remaining tab.

“So when you consider the alternative, it’s pretty cheap,” Scheel said.

If a patient doesn’t have insurance, the AirLife membership will pay for 50 percent of the cost of the flight, Soliz said.

If your insurance carrier deems the flight as “medically unnecessary,” the membership also would pay half the costs.

People with Medicare coverage would be fully covered under the membership.

“At first I thought it was too good to be true, but after doing some research, this is a no-brainer,” said Pct. 3 County Commissioner Greg Parker. “I would encourage any citizen to sign up.”

Schertz EMS, which serves Emergency Service District No. 6 in the southern part of the county near Garden Ridge, could soon offer an almost identical program to help residents pay for ambulance transport.

The buy-in for a Schertz EMS membership is $50 annually for single person with insurance, and $62 for someone without coverage.

A family membership is $60 with insurance coverage and $75 without.

Like AirLife, Schertz EMS would only fund a percentage of the cost of transport for residents who are uninsured, and those whose trips are deemed “medically unnecessary” by the insurance company.

The program is expected to begin in January, and Schertz EMS Director Dudley Wait said it was something any EMS provider could consider as an option.

“Each organization would have to study and weigh their rates versus their reimbursement costs,” he said. “But I wouldn’t be surprised if most of them found that this is something that is very feasible, and a good thing for citizens.

“Folks don’t plan on having to make that 911 call, but if it happens, they’ll be glad they had something like this.”
Posted by Sam at 6:41 AM