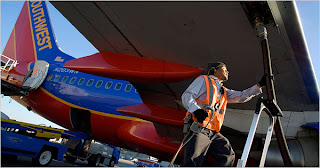 Why I think there could be acquittals in this matter from the jury.

Call it jury nullification if you like but the seed of the idea that there are many others not at the defense table will probably be hard to shake from their thoughts.

Prosecutors and defense lawyers Thursday put their spin on three weeks of testimony in the Southwest Airlines stolen ticket trial, but left lingering questions about who was charged and why.

To the government, the five people on trial bought and sold multiple tickets after being given a critical instruction not to say that they had purchased them.

But to the defense, it’s a case of selective prosecution, given that the people who started the scheme, former court bailiff James Jackson and his wife, former Southwest employee Althea Jackson, distributed 5,600 tickets she stole to many people besides the five defendants.

“Where do you draw the line?” asked Mark Stevens, lawyer for defendant Deborah Robinson. “What’s the magic number ... that gets you a seat at the defense table?”