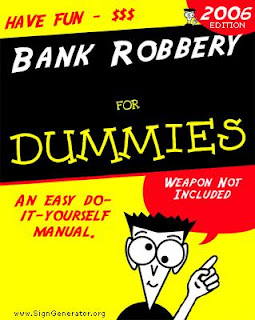 As I learned many years ago the Road to Perdition is paved with the stones of Good Intentions.

Robbery however is not an option.


Elderly Bank Bandit: I robbed to pay off my mortgage
Man being held on $500,000 bail
By R. Stickney - www.NBCSanDiego.com


"I had to get us out of this," the elderly man said Friday from the other side of the glass at San Diego central jail. "I've never done a bad thing in my life. But when you get desperate, I guess you throw all that sh-- out the window."

Listening to how Michael Casey Wilson of Santee tells it, a 17 percent mortgage, the threat of homelessness and a terminal health condition will turn a man to crime.

Wilson, 69, is accused of walking into the Bank of America branch in the 4100 block of El Cajon Boulevard in City Heights and handing a bank manager a demand note, saying he had a bomb. Prosecutors said he made off with $107,000 before he was caught lying on a front porch near the bank.

"I wrote them an apology. I am so sorry," he said referring to the employees who rushed out of the bank. "It's not my purpose in life to scare people."

"If it would've worked the way I wanted it to, it would've just been he and I. But he told everybody. He shouldn't have done that," Wilson said.

On Thursday he pleaded not guilty to three counts of robbery and one count of falsely reporting a bomb to a business. In an interview Friday, Wilson was very open about the plan he had hatched to save his home.

"I saw all of a sudden all the people rushing out and I knew I was had," he said. "I knew that he had called me in. C'est la vie."

Wilson said he lives with his 73-year old wife who he described as a "gentle soul." He said he feared for her future living on the streets if he couldn't make their house payment.

Looking at Wilson, you can see his health is suffering. He claims doctors have diagnosed him with severe arthritis, sleep apnea, heart problems, and a disease he described as one "that makes you fly off the handle." Wilson said he was told he had one to two years to live.

When he hatched the bank robbery plan, he said that he had considered the consequences but thought, "It was 50-50. Well if I get caught, I get caught. I'm dying anyway so what different does it make."

Wilson could face more than seven years in prison if he is convicted. His bail was set at $50,000.

"I'm an asshole. Let's face it," he said. "Here's a man who f--ked up his life and his family's life but I did it with good intentions. Just stupid intentions."