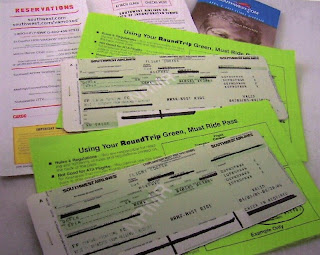 This information makes the whole thing even more crazy to me.

If the folks buying the tickets and then re-selling them are unaware the tickets are stolen how could the jury find some guilty and some not guilty?

If it is merely based on the implied well they were told to tell people that they were bumped or they had complained and were given the tickets where is the legal and factual sufficiency to sustain the verdict beyond a reasonable doubt.

I mean isn't it all a guess on the jury's part?

The Southwest Airlines “green passes” that caused headaches for Bexar County Courthouse officials and led to a high-profile trial are sold all the time, despite the company's claims that that practice is prohibited.

They're on eBay and Craigslist and advertised in newspaper classifieds. Several, for instance, were advertised online as the federal trial progressed over three weeks.

While some sold online are “buddy passes” with restrictions including blackout dates, green passes — also called “Love tickets” — are more valuable to the holder.