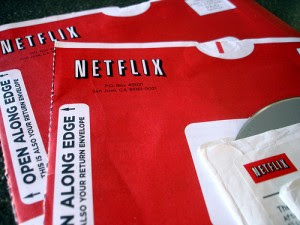 What is up with postal workers?

--A postal worker who stole more than 3000 DVDs mailed by Netflix to its customers pleaded guilty yesterday to federal theft charges. Myles Weathers, who worked at a mail processing and distribution center in Springfield, Massachusetts, was nabbed last year for the video heist after Netflix officials became suspicious about the frequency with which DVDs were being pinched.

Weathers, 49, was subsequently arrested after surveillance footage showed him removing DVDs from Netflix envelopes and placing the discs into his backpack. The below criminal information filed yesterday in U.S. District Court does not disclose whether Weathers was building an impressive home video library or planning to sell the hot titles.

A plea agreement, an excerpt of which you'll find here, valued the recovered 3012 DVDs at $36,471. Weathers, now a former government employee, is scheduled to be sentenced on December 23. While his felony plea carries a maximum of five years in prison, sentencing guidelines call for a term of about a year in custody.
Posted by Sam at 8:56 AM