The nut has fallen 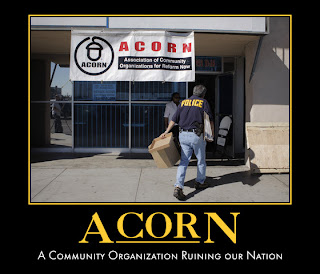 Well, Well, the Senate can move quickly if it wants to.

WASHINGTON (Reuters) - A poverty-rights group that has drawn the ire of conservatives suffered another setback in Washington on Monday when the U.S. Senate voted overwhelmingly to deny it access to federal housing funds.

The Association of Community Organizations for Reform Now, which helps poor people fight foreclosures and fix tax problems, has received more than $53 million in U.S. funds since 1994, but conservatives' charges of widespread fraud have begun to impact its reputation in the capital.

Last week, the U.S. Census Bureau told the group it did not want its help boosting participation in next year's census.