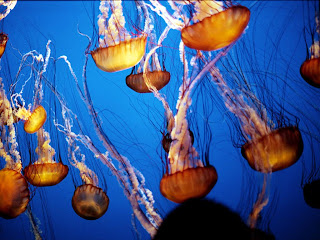 I knew as soon as I saw this that alcohol had to have played a big part.

MADEIRA BEACH — A 41-year-old man who witnesses said had been drinking since 9 a.m. was arrested Monday afternoon after authorities say he created a disturbance by pretending to drown and throw jellyfish on teenagers.

Keith Edward Marriott, of 100 154th Ave. in Madeira Beach, faces charges of disorderly intoxication and carrying a concealed weapon after a pocketknife was found in his shorts, Pinellas County sheriff's deputies said. Marriott repeatedly submerged himself and floated to the surface, "causing concern for his safety," and was "loud and disruptive," according to a sheriff's report.

Then he started throwing sea creatures.

Marriott, who is listed on arrest reports as working for a brokerage company, was being held at Pinellas County Jail in lieu of $250 bail.