The whole tooth and nothing but the tooth! 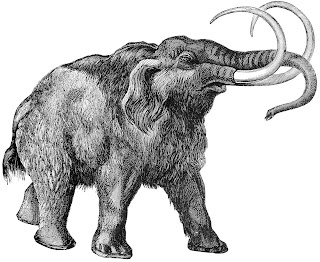 Now, that is a nice find.

I wonder if they would've been good barbecued?

I mean this being Texas and all that.

A Spring Branch man has attracted the interest of paleontologists after finding a mammoth tooth in a cave.

B.T. Price, a professional spelunker, made the discovery as he was exploring a newly discovered passageway in Snookies Cave at Specht Crossing Ranch on Sept. 12.

“At first I thought it was a rock and was going to move it out of my way and I picked it up and started looking at it and I said, ‘This isn’t a rock,” Price said. “It took about two minutes of standing there just staring at it before I realized what I had.”

What he had is a Columbian mammoth tooth, a species of mammoth that disappeared from the planet around 12,000 years ago, said Dr. E. L. Lundelius, Jr., a paleontologist with the University of Texas.

“There’s no doubt it is a fragment of a mammoth tooth,” he said, after viewing pictures of the find.

The tooth has a rough, flat bottom and a ridged root that is characteristic of mammoth teeth, Lundelius said.

Price said he had been told a team of graduate students would be coming from UT to look for more mammoth artifacts. Lundelius said he was not sure if he would be able to accompany them.