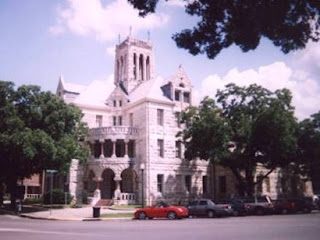 Sorry, Mr. Peterson, in my opinion, you are simply doing this as a ploy to gain a political advantage while you are running for County Judge.

How can you claim you are concerned about holding costs down while on the other hand you went around promising every county employee you could lay your hands on that you would approve 15% raises or better because we're underpaid?

Again, that was what you must have felt was politically expedient at the time. This smacks of hypocrisy to me, simil;ar to Governor Perry running around shouting "Secede" at the drop of a hat to tap into the "agin government" vote.

Glen, get your own house in order. Sorry Pardner, I like you, but i felt I had to speak out.

Also, BTW, your first name isn't Attorney. Why don't you check with the Texas Ethics commission if you can run as "Attorney" Peterson?

County Commissioners continued to press for a new justice center at a public workshop Tuesday in the face of growing opposition to the estimated $36 million project.

The workshop was open to the public and the only item discussed was the justice center. No action was taken.

The county aims to fund the justice center through certificates of obligation, but a petition to force a bond election will begin circulating next week.

“This is nothing but a black hole,” said Glen Peterson, who is sponsoring the petition.

“We certainly need to maintain and update the existing courthouse facility, but that doesn’t take $36 million,” said Peterson, who is running for county judge next year. “There is a point in time where we will need a new facility but it is not (now), in the worst of economic times.”

“The old courthouse is beyond repair,” Scheel said, citing one courtroom that had sewage dripping from the ceiling into a bucket during a recent trial. He said plumbing was so old attempts to patch leaks resulted in further breaks.

However, the security situation is the motivating factor for the court’s sense of urgency in building a new facility.

“The annex was built 29 years ago and was built for convenience — it has 27 entrances to it and you can’t secure all of them and still comply with the city fire marshal’s rules,” Scheel said.

“The primary, overwhelming issue in this is public, employee, judge, law enforcement and prisoner safety,” he said. “We don’t have that now and we never will have (it) in our existing facilities.”

The new center would have one primary public entrance in the front of the building, which officials say would allow sheriff’s deputies to screen entrance to the facility more effectively. Prisoners would be transported into the building from an underground loading area with a separate elevator system.

Holding cells on each floor would separate juveniles from adults and minimize prisoner contact with the public and courthouse workers.

The existing courthouse and annex lack these features.

Commissioner Jan Kennady made a point to mention a variety of input had been gained in the development process.

“Every single department that had anything to do with this justice center was in on the planning,” she said. “We called in every single department. They all participated so we could come up with something that would make everyone safe. We are all in this together, and if we’re going to do this we certainly want everyone who will be housed there to have a part in it’s planning.”

Sheriff Bob Holder and judges Charles Stephens and Jack Robison also spoke in favor of the new facility, which Scheel described as a necessary solution to the rapidly growing population of New Braunfels.

“If the last 75 percent of the people that have moved in here hadn’t come, we wouldn’t be sitting here addressing this,” he said. “People came and I don’t blame them, but people are going to keep coming and we have to be ready when they get here. We can’t wait, and we need to start preparing.”

“I would like to see this go to a vote of the citizens in the county,” he said.
Posted by Sam at 6:38 AM