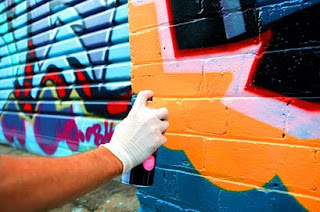 Why California may go the way of the Dodo.

Make the victims pay to graffiti-proof their homes? or face fines??

Why not make the taggers pay or their families pay?

Looking to prevent your home from becoming a tagger's canvas? The city of LA has a plan that asks homeowners to pitch in or pay -- whether they want to or not.

All new buildings in Los Angeles -- including homes -- must have anti-graffiti coating under an ordinance approved unanimously by the City Council on Tuesday. Homes in the tagThere is an exception if the owners promise to remove any graffiti on their property soon after it appears.

The ordinance will take effect 30 days after being signed by the mayor.

The anti-graffiti coating must cover the walls and doors from the ground to a height of at least nine feet. The coating is mandated on all buildings, unless owners sign a "Covenant and Agreement Regarding Maintenance of Building (Graffiti Removal)" with the Los Angeles Department of Building and Safety.

That contract would require owners to remove any graffiti on their buildings within seven days of the graffiti being applied, or within 72 hours of being notified by the department.

Failure to abide by the contract could result in a $550 fine.

The Arroyo Seco Neighborhood Council opposed the ordinance, saying in a statement: "While this may be a well-intentioned effort to keep businesses, etc. from being 'victimized' by graffiti twice -- once by taggers, then again by the possibility of a city fine -- allowing graffiti to stay visible to the public for seven days effectively rewards taggers, providing them with more than twice the window to showcase their vandalism, and makes ongoing removal efforts worthless."

City law had previously required only that commercial structures have anti-graffiti coating or impermeable surfaces, such as ceramic tile or baked enamel. It also did not include the exemption for owners who sign an agreement to quickly remove the vandalism.

Councilman Ed Reyes, chair of the council's Planning and Land Use Management Committee, told the council "we wanted to create more flexibility for property owners in dealing with their commitment to keep our city looking cleaner."

"Graffiti is best deterred by having a short life," the council said in a statement earlier this year. "If taggers' vandalism is visible the next time they visit, and for a week or more afterward, it encourages them to do more and others to add to it. Seventy-two hours should be the maximum."

Councilwoman Jan Perry voted in favor of the ordinance, but not without hesitation.

"I'm concerned about placing the burden on the property owner," she said.

Perry said the ordinance was vague about the kinds of surfaces that must be protected and the types of anti-graffiti coating that can be applied. She said it also failed to address vandalism in the form of acid etchings on glass windows.

"(This ordinance) is a good first cut but it's not dispositive of the issue, so I think we're going to have to go back and do further clarification in a very short period of time," Perry said.

She moved to have council's Public Safety Committee review the ordinance in 60 days.

The coating can cause discoloration to a building's surface and wear off over time, officials noted. Council members said that's why the opt-out option was included in the approved proposal.