Duct tape will fix anything 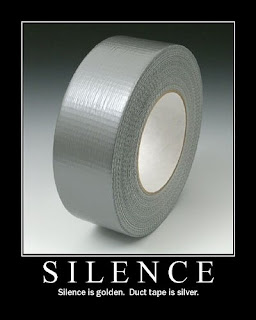 OMG I hope they really let loose on this nut job.

Pulling the hair of a blind passenger?

Passenger jailed in flight disturbance
By Steve Lyttle, Staff Writer
CHARLOTTE - A New York woman has been jailed in Charlotte, charged after she allegedly slapped a crew member on the buttocks, pulled the hair of a blind passenger and caused other problems Saturday on a flight from Puerto Rico to Chicago.
Maria Esther Castillo, 45, of Oswego, N.Y., was arrested by federal authorities and charged with interfering with the operations of a flight crew.
Authorities say the flight crew was forced to use duct tape on Castillo to keep her restrained until the jet landed. Charlotte-Mecklenburg police then charged her with resisting arrest after airport police boarded the plane.
Castillo made an initial court appearance Monday and faces a detention hearing Thursday.
According to affidavits filed in federal court in Charlotte, passengers and the crew said Castillo's behavior became loud and disruptive about 90 minutes into the flight. According to FBI agent Peter Carricato, Castillo began using profanity at others on the plane and was "invading the personal space of other passengers by touching and jabbing them."
A passenger sitting across from Castillo told police that the suspect hit her in the arm, despite her efforts to ignore the woman.
Authorities also said that at one point in the flight, Castillo fell forward, over a blind passenger in front of her and began pulling the woman's hair. She also is accused with slapping the flight attendant on the rear end and throwing a wet cloth across the plane.
"This behavior continued intermittently, with short periods of calm, followed by loud outbursts," Carricato said.
Finally, Carricato said, the flight crew used duct tape to keep Castillo restrained in her seat.
Carricato said the suspect became quiet when the pilot announced that the flight would be landing in Charlotte to get rid of a disruptive passenger. But, he said, Castillo grew angry again when airport police boarded the plane.
One passenger told authorities that Castillo had been drinking at the airport bar in San Juan, Puerto Rico, before the flight took off. She also had one drink on the flight, authorities said, but the crew refused her request for additional alcohol drinks.
Posted by Sam at 8:29 AM