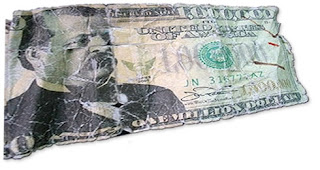 I am not a believer in coincidences so I am naturally suspicious that a bomb threat is phoned into the store after a guy was caught passing a counterfeit hundred dollar bill.

New Braunfels Police were investigating a report Tuesday evening of counterfeit bills being passed at the Kohl’s Department Store located off Interstate 35 when a bomb threat was called into the store.Police spokesman Lt. Michael Penshorn said Wednesday that the two incidents could be related.

According to police, a man who said he had received three counterfeit $100 bills from a customer of his tree-trimming business attempted to pass one of them at Kohl’s at about 6 p.m. Tuesday.

As the man — whom police declined to identify — was in handcuffs being interviewed by officers, a bomb threat was called into the department store, Penshorn said. No charges have been filed in the counterfeit case because no link has been established yet to who printed the bills, Penshorn said.

Investigators are following leads given by the man who tried to pass the bills, Penshorn said, but had not received enough information to locate a suspect as of Wednesday evening.Penshorn said no suspects have been identified in the bomb threat but that there is a possibility the two are linked.Two officers were at the scene initially, and four more showed up after the threat was called in, Penshorn said. The building was evacuated while loss prevention employees and officers searched the building, finding nothing.

Penshorn said that when a bomb threat is called into a business, management of that business decides whether to conduct a search, which usually is handled by the business’s loss prevention employees or management.There have been at least three cases in the past month in New Braunfels involving counterfeit money, all of them having to do with businesses receiving bills from individuals. No charges or arrests have made in those cases, Penshorn said.

A manager at Kohl’s declined to respond Wednesday, and no one at loss prevention was available for comment.
Posted by Sam at 5:35 AM