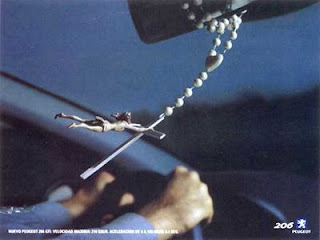 I guess he was listening to Carrie Underwood's 'Jesus take the Wheel', which is a fine song.

A metaphor for having God in your life, it is not one to practice literally, however.

'God said she needed to be taken off road'
By Robert Crowe - Express-News
A speeding pickup rear-ended a woman's sedan on the South Side on Friday morning and sheriff's officials say the driver said it was Jesus' will because the other motorist was not “driving like a Christian.”
The bizarre incident that shut down southbound U.S. 281 above the Medina River happened about 7:25 a.m.
“He just said God said she wasn't driving right, and she needed to be taken off the road,” said Lt. Kyle Coleman of the Bexar County Sheriff's Office.
The driver of the pickup was identified in a Sheriff's Office news release as Michael E. Schwab, 52, of Blooming Grove.
Schwab told first responders at the scene that “the other vehicle was not driving like a Christian and it was Jesus' will for him to punish the car,” according to the release.
The 35-year-old woman was driving her sedan north when the pickup struck her vehicle. Schwab told deputies he was driving faster than 100 mph at the time, Coleman said.
The impact caused both vehicles to spin across a median before they came to a stop along a barrier in the southbound lanes. No other vehicles were involved.
Though both vehicles were badly damaged, the drivers suffered minor injuries.
“God must have been with them, 'cause any other time, the severity of this crash, it would have been a fatal,” Coleman said.
The woman was taken to a hospital as a precaution. Schwab was later charged with aggravated assault with a deadly weapon, motor vehicle. His bond was set at $50,000, according to the news release.
The pickup driver did not specify for authorities how the woman was driving poorly.
Investigators determined the female driver “had done nothing wrong,” according to the release.
Posted by Sam at 7:58 AM