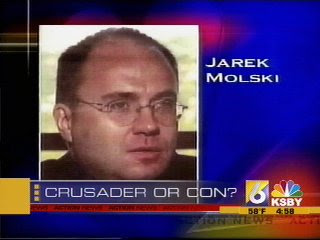 Wow, I wonder if this violates his rights?

Where do you go if the SCOTUS says NO to any more suits? The World Court?

Good news for him is he can file elsewhere.
After more than 400 lawsuits, disabled man can sue no more
U.S. Supreme Court refuses to hear Jarek Molski's appeal, letting stand a federal judge's ruling barring the disabled man from filing any further litigation.
By Carol J. Williams November 18, 2008
Whether Jarek Molski is a crusader for the disabled or an extortionist who abused the law for personal gain, the vexatious litigant has filed his last lawsuit.The U.S. Supreme Court declined Monday to hear the case of Molski vs. Evergreen Dynasty Corp., owner of a Chinese restaurant in Solvang, Calif., in a legal Waterloo for the 38-year-old Woodland Hills man. Molski filed more than 400 suits under the Americans With Disabilities Act before a federal judge barred him from future litigation.
FOR THE RECORD:Frequent litigant: An article in Tuesday's California section said that Jarek Molski of Woodland Hills had "filed his last lawsuit" as a result of the U.S. Supreme Court's refusal to review a federal judge's order that barred Molski from filing further lawsuits over alleged violations of the Americans With Disabilities Act. The judge's order applied only to the Central District of California, which includes Los Angeles. —
In a highly unusual action in 2004, U.S. District Judge Edward Rafeedie, who has since died, branded Molski a "hit-and-run plaintiff," accusing him of systematic extortion of businesses across California.
Molski, who has used a wheelchair since a motorcycle accident two decades ago, sued restaurants, bowling alleys, wineries and other retail outlets for insufficient handicapped parking, misplaced handrails and other violations of the disabilities act, demanding that business owners be fined $4,000 for every day their facilities failed to meet exacting federal standards.

Fear of adverse judgments compelled many to settle out of court, earning the Polish-born plaintiff hundreds of thousands of dollars in less than two years.Molski was traveling abroad and couldn't be reached for comment, said a secretary at the San Francisco office of his attorney, Thomas E. Frankovich. The Frankovich firm also was accused by Rafeedie of misusing the courts and barred from filing more suits without the judge's permission.

The U.S. 9th Circuit Court of Appeals in April denied a rehearing of the Evergreen case by the full court. But nine of the court's 28 judges, including Chief Judge Alex Kozinski, dissented, arguing that the 1st Amendment right to petition the government for redress of grievances is "one of the most precious of the liberties safeguarded by the Bill of Rights.

"Courts have the right to shield their dockets from abuse by frivolous litigation, said Peter Eliasberg, managing attorney for the American Civil Liberties Union of Southern California. "But this is a remedy that should be used very sparingly, especially with regard to a statute that is disobeyed a lot," he said of the disabilities act.
Posted by Sam at 8:13 AM